Home » Eno-gastro » Where there is always good food

Besides fine sweets, Slavonia, Baranja and Srijem are known for high quality delicacies such as kulen and kuleno veseke (types of sausages), rich meat dishes and specialties such as čobanac (3-4 types of meat cooked with vegetables)or fiš (spicy fish sauce). Today one can taste the modern varieties of these dishes in restaurants in Eastern Croatia with the indispensable drop of premium wine.

In the fairy tale environment of forests, clear rivers and vast fields ,Slavonia, Baranja and Srijem came to be, regions in Eastern Croatia known by far for their hospitality.  Those who have been there will agree that it is a part of Croatia where the most and best is eaten. Every guest is appreciated. In the past, every house, regardless of how modest it was, had a special room for guests. The best tableware was kept for guests and the best meat, eggs and cream were served. It has remained so to this day. The best from nature is prepared to be put on the table in Slavonia, Baranja and Srijem in the best manner and served with plenty of love.

What is today recognized as the cuisine of Eastern Croatia is the result of the coexistence of the indigenous and newcomers, the experience of neighbouring countries as well as historical events where conquerors took turns, but above all, customs and seasons were respected. Today you will be seductively attracted by its smells, and equally enthused by the simplicity and ingenuity of peasant dishes as well as those that appeared under the influenceof the Austro-Hungarian and German-Hungarian cuisines.

To visit Slavonia, Baranja and Srijem and not taste the cured meat delicacies – kulen, kulenova seka or sausages is almost equal to sin. You will enjoy trganci (special pasta) with cheese and cracklings, the taste of a pig roasted on a spit, but also dried carp and carp on a forked branch. You will also be attracted by dishes from afood cooking kettle seasoned with domestic ground peppers preparing fiš paprika or čobanac, and the famous čevap(kebab) from Ilok or chicken soup with homemade noodles. We could go on with a long list of specialties from this region, but it is important to know that no dish can start without first drinking čokanjčić (small Turkish flask) of odorous šljivovica (plum brandy), nor can it end without the famous wines from Baranja and Srijem vineyards. 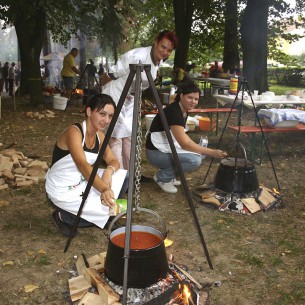 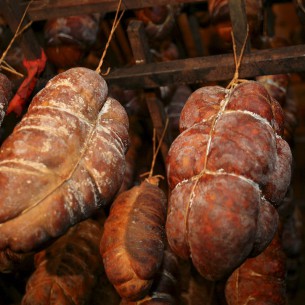 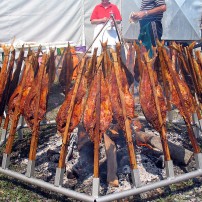 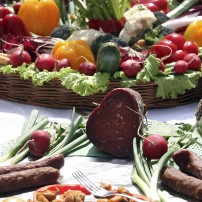 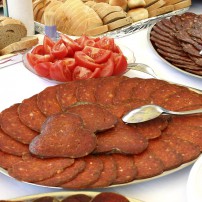 Since in the past sugar was available in small quantities, in Eastern Croatia cakes were madewith natural sweeteners such as strudel from Turkish pumpkin, sugar beet or seasonal fruit, honeybread sugar from beet honey, simple cakes with jam from plums, and the particular specialty was compote without sugar but from dried plums or thin apple or pear sheets.